The fluffed pet poodle in a basket is the quintessential photographic Hallmark of kitsch. The Wegman Weimaraners are still the most successful crossovers between high art photography and calendar commodity. What the schnauzer is it about photos of animals in highly artificial environments that hit such a g-spot in the affections and affectations of late capitalist collective aesthetics? We’re not talking wildlife documentary here, we’re not talking ‘authentic nature experience’, we’re talking pets and pet portraiture.

Photography was born as medium of the middle mass, and the photographic portrait established itself early as a pervasion fed by prosperity, a desire for self-posterity, and for its celebrity-building capabilities.

Parisian studio portraiture pioneers Mayer and Pierson advertised widely as “photographers to His Majesty the Emperor”, and were commissioned by such to produce what could well be the world’s first family pet portrait – The Imperial Prince (1859). It features said heir to the throne sidesaddle on a custom crib strapped to the Imperial Pony. The animal stands obediently on an oriental rug, the velvet backdrop is neutral as the cold dead stare of the child. The Imperial Prince was displayed in fashionable shop windows along the Boulevard des Capucines as a savvy piece of imperial propagandist schmaltz with instant appeal for the passing bourgeois promenaders. A century later, the luxury of 19th-century gentry, house pets and studio photographs became 20th-century symbols of middle class household status.

Yvonne Doherty and Justin Spiers’ Pet Photo Booth explores both these histories and their contemporary status. Their Booth is a travelling road show, and its scenic wallpaper backdrop and its mobility bring it closer to the Pixie Photo Labs of suburban shopping centres of the 1980s than the elaborate prop-filled studios of the 1880s. Like a Pixie franchise, the impetus for Pet Photo Booth was sentimental attachment, in this instance taking the form of a single crappy snap of the most munted animal in the known universe: the now thankfully departed JoeLouie.

The Doherty sisters’ special childhood friend looked to be a poodle crossed with a rat. He had wonky eyes and permanent brown stains around both mouth and groin. The dog was ugly and the photo in question makes him uglier. It’s out of focus, has some serious red-eye issues and features JoeLouie on the carpet in front of the family Xmas tree in a puddle of poodle pee. During the first outing of Pet Photo Booth in 2005 this photo was placed in the front window of the Breadbox Gallery with an in memoriam notice. Whether the passing bourgeois of the day found it appealing or not is open to question, but the pet lovers would have understood.

Since then, Pet Photo Booth has travelled to dog shows and cat shows, had visitations from chicken lovers and is currently on a trip to the South West of WA to make the most of a gathering of pig hunters and their dogs. It is also set to run as a public service in a very public square in Perth during the Artrage Festival, complete with ‘pimping and fluffing’ table for pre-shoot make over and, unlike the Pixie franchise, Pet Photo Booth does not involve an exchange of cash, but does require one of trust.

While Yvonne shoots fast on digital in order to gift participants a keepsake print, Justin shoots laboriously in medium format, capturing only certain poses. For these the participants willingly sign away both their own and their pets’ rights to the image and where it might one day hang to be gazed on by all and sundry.

It is unfamiliar to inject the pet into the familial frame of the ‘couple’ portrait. Bloke in King Gees and Blue Heeler at, um, heel … acceptable. Ubiquitous as ‘mate’. Tattooed bovver boy in white chinos cupping Chihuahua … unfamiliar, unsettling… as well as unnatural.

A Chihuahua is not a ‘natural’ species. Its a pedigree breed that has taken 14,000 years of human intervention to be ‘made pure’ through the twin forces of domestification - animal husbandry and selective breeding. Pure and artificial. It’s why the Aryan aspiration of the Alpine backdrop frames the little fella so aptly and why the whole concept of ‘pet’ is perplexing when it involves pedigree designed for purely domestic purposes. Lap and dog are two words that sit together snugly, but not entirely comfortably.

Pet relations are a quintessential sign of suburban normalcy involving meaningful relation, companionship and an intimacy that speaks in a language that needs no language. On the flipside, pet relations are entirely abnormal – an artificial construct defined over millennia by the wants and needs of a dominant species. Either way you look at it, the photographic portrait studio has, from the outset, been a realm reliant on both artifice and sentiment. And while the world of the pet lover crosses social and demographic boundaries, it also contains no small degree of kook. It’s the meeting of all these factors that gives the Pet Photo Booth its exponential potential. It’s the kind of project that could progress indefinitely, just so long as the artists can match their level of obsession to that of their human subjects for their pets.

Marcus Canning is CEO of ARTRAGE Inc., Director of the Artrage Festival & Northbridge Festival, Chair of Festivals Australia, and has a sporadic practice that occasionally touches on photographic media. 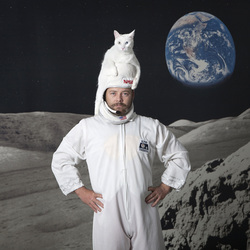 Marcus and Mischief
Powered by